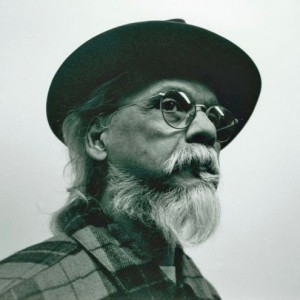 Mohan Samant (b. Manmohan Balkrishna Samant in Bombay (now Mumbai), 1924; d. New York City, 2004) was an early Indian modernist painter and a member of the Progressive Artists Group. He was also a lifelong player of the sarangi, an Indian bowed instrument.

Samant was born in Goregaon, a suburb of Bombay, India, in 1924. The fourth child of eight, he grew up in a cultured environment. Samant’s father, Balkrishna Ramchandra Samant, was a headmaster, and his mother a homemaker. His younger sister, Vasudha Patil, an accomplished novelist, has written that their parents encouraged the family’s interest in music, art, theater, movies, travel, and writing, and Samant displayed an early proficiency in and dedication to both music and the visual arts.

Samant received his diploma from the Sir J.J. School of Art in 1952, where he studied under S.B. (Shankar Balwant) Palsikar. The following year he won the Governor’s Prize at the Bombay Art Society Annual Exhibition.

In 1952, Samant joined the Progressive Artists Group and exhibited with them in several shows, including the 1953 exhibition, Progressive Artists’ Group: Gaitonde, Raiba, Ara,Hazarnis, Khanna, Husain, Samant, Gade, at the Jehangir Art Gallery, Mumbai. He also participated in the Bombay Group, a successor to the Bombay PAG. According to artist Baburao Sadwelkar, the Bombay Group, which also included Hebbar, Ara, Chavda, Kulkarni, Laxman Pai, Har Krishnan Lall, and Sadwelkar, had “six big exhibitions [between 1957 and 1964], which were received extremely well.” Samant did not mention the Bombay Group in interviews or recorded conversations, but a review from the Times of India confirms that he had works in their November 1956 exhibition.

In 1956, Samant was awarded the Gold Medal at the Bombay Art Society’s group exhibition, the Gold Medal at the Calcutta Art Society show, and the Lalit Kala Akademi All India Award. Samant also participated that year in the seminal exhibition Eight Painters: Bendre, Gaitonde, Gujral, Husain, Khanna, Kulkarni, Kumar, Samant, curated by Thomas Keehn, and in the Venice Biennale. He spent 1957–58 in Rome on a scholarship awarded by the Italian government. In February 1959 a Rockefeller fellowship took him to New York City, where he would remain until 1964.

The organizers of the legendary Dunn exhibition in 1963—whose international selection committee included Alfred Barr of the Museum of Modern Art, New York and Sir Anthony Blunt, Surveyor of the Queen’s Pictures—chose works by Edward Hopper, Robert Rauschenberg and Willem de Kooning, among others. Samant was one of only two newcomers included in the exhibition, and was singled out for special recognition in the Time article on the show. He was profiled again in the magazine a year later.

Samant spent 1965–68 in Mumbai. During that time his work was still shown in New York, where he was represented by World House Galleries.  (The association with World House continued privately after the gallery closed in the late 1960s.) In 1968, Samant, like S.H. Raza and F.N. Souza before him, left India permanently. Samant went back to New York, where he continued to work and to exhibit internationally.

In 2000, Samant received the Asian American Heritage Award for lifetime achievement in the arts. In January 2004, not long after a retrospective in India, he died in New York.

Samant participated in the seminal international exhibitions of twentieth-century Indian modernism. Ranjit Hoskote, internationally renowned Indian poet and art critic, wrote in 2008 that Mohan Samant was “the missing link in the evolutionary narrative of contemporary art in India.”

As observed by Jeffrey Wechsler in his essay on Mohan Samant and his place in twentieth-century modernism:

Samant’s practice was the antithesis of a signature style. Throughout his career, he delved into divergent materials and techniques and constantly shifted imagery. While some of his processes and forms can be perceived on a regular basis over long periods of time, there was no hewing to a given image, endlessly repeated. He stated that “I find that stagnation in style and the search for the same forms cause an artist to suffer an immense amount of laboriousness in his work.

Samant’s art is, instead, determinedly far-reaching and inquisitive, and encompasses admitted influences that cover the whole history of human visual creativity, Eastern and Western. Samant stated straightforwardly that his sources derived from five thousand years of art from varied civilizations. These included the cave paintings of Lascaux, Egyptian wall paintings and hieroglyphs, Indian miniatures and murals, Precolumbian ceramics, African sculpture, and the modernism of Pablo Picasso, Henri Matisse, and Paul Klee.

A painting by Samant, Door of the Heart, 1964, can be viewed at the Grey Art Gallery, New York University in their current exhibition: “Abby Grey and Indian Modernism.”